Las Vegas has become far greater than its past identity as America’s casino and gambling capital. Increasingly it has become a premier tourist destination in the United States for families too – not just bachelor and bachelorette parties. Concerts, sports, the arts and conventions fill the Vegas calendar each year, but let’s look at 5 of the most fun you can enjoy! But before we start, this is by no means an exhaustive list. In fact condensing fun things to do in Vegas down to just 5 was incredibly hard! 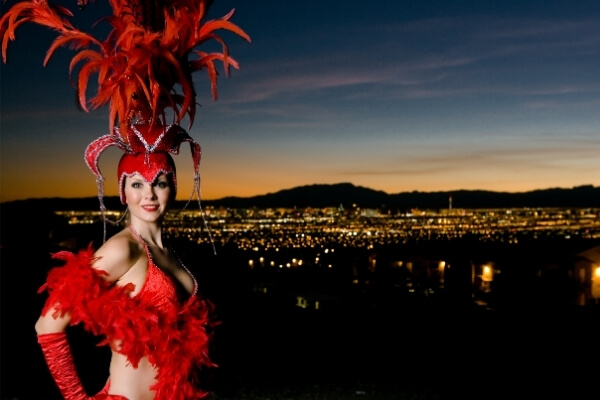 Vegas is a premier destination for not just American acts, but international ones also. Sting, Chicago, Usher, Morrissey, ZZ Top, Garth Brooks, Luke Combs, Ice Cube, Enrique Iglesias with Ricky Martin are just some of the hundreds of performances on offer for 2021 around Las Vegas’ various world class music venues, both indoors and out. There’s literally something on for every music taste.

Las Vegas has two major professional sports teams now, the Las Vegas Raiders of the NFL who play at the jaw-dropping Allegiant Stadium and the Las Vegas Knights of the NHL who play at T-Mobile Arena. Both stadiums are new and state-of-the-art and located in the heart of the famous Las Vegas Strip. Get decked out in the iconic Silver and Black for a Raiders game or try and keep up with the puck at a Knights hockey game.

Apart from casinos, Vegas got its worldwide reputation as a premier entertainment destination because of the extensive rotation of stage shows it hosts and has hosted. Vegas has seen the likes of Cirque du Soleil, the Blue Man Group, David Copperfield, Siegfried & Roy and Criss Angel grace its various stages through the years. Prepare to be blown away no matter what you go see!

4. The Fountains at The Bellagio

This free nighttime activity is a nightly spectacular that anyone can enjoy – you don’t have to be a guest of the hotel. Set to the choreography of famous classical music, opera and Broadway numbers, the fountains draw rolling crowds throughout the night and whose imaginations their majestic beauty captures.

To list off all the available tours visitors can take while experiencing Vegas would take pages and pages. Traditional highlights include helicopter tours and visiting the Hoover Dam, visiting the Grand Canyon, open top bus rides along the Strip, culinary tours and party buses. There’s something for everyone when it comes to tours in Las Vegas!