Are you headed to Vegas for a bit of gambling, a big buffet, or to check out a pawn shop or two?

A great way to enjoy such a trip is via an RV so you can take your time and see the stops on the way to Las Vegas.

Whether you are departing from California, Arizona, or elsewhere there is plenty to see. 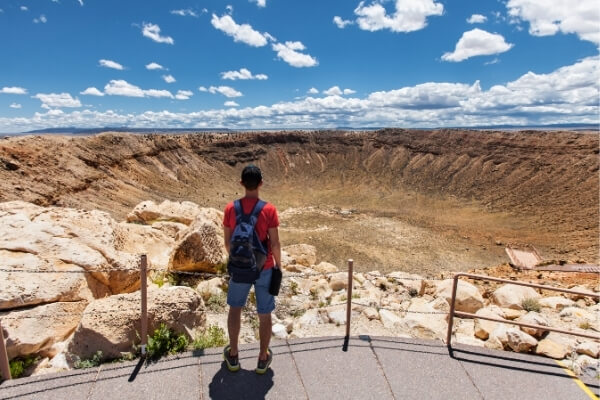 If you are driving from the Grand Canyon State stop at the Meteor Crater in Winslow. A preserved meteorite impacted and measures about a mile across and more than 550 feet deep. Some say it hit Earth about 50,000 years ago.

The Arizona Last Stop in White Hills, Ariz., for burgers, etc., is the “Gateway to the Grand Canyon” and final stop before the Nevada border.

Visit the Hoover Dam Lookout a Nevada landmark and take in breathtaking views of Lake Mead.

Seven Magic Mountains in Jean, Nev., has 30-feet high rainbow-colored rocks stacked in columns created by Ugo Rondinone and commissioned by the Nevada Museum of Art in 2016.

The Pioneer Saloon in Goodsprings, Nev., is considered the oldest bar in Southern Nevada. It opened in 1913 and is where actor Clark Gable waited to learn about wife Carole Lombard in 1942, who was killed in a plane crash on nearby Potosi Mountain.

Bonnie & Clyde’s Death Car in Primm, Nev., at Whisky Pete’s north of the state line between Nevada and California, get gas, go inside, and see Bonnie & Clyde Death Car once used for many crimes.