Treasure hunters, gold miners, saloon keepers, farmers, and outlaws all came to the desert for the same reason people do today – to strike it rich or seek solitude in the mountains and canyons we now call Las Vegas. Leave the glittering lights behind and hop in your air-conditioned car to discover the fascinating history of nearby boom-and-bust ghost towns near Las Vegas. 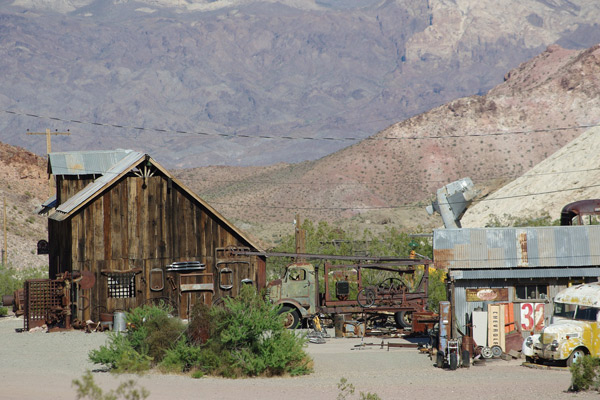 Once the busiest gold rush town in Nevada, Nelson is one of the easiest to visit – and most photogenic – ghost towns near Las Vegas. Located just 45 miles from The Strip down Eldorado Canyon, this former site of the Techatticup Mine – the first major gold strike in the state – is littered with the ruins of buildings and vehicles, plus the odd site of movie props, like a plane that was used in the movie 3,000 Miles to Graceland. Take a mine tour and keep an eye out for the occasional movie or photo shoot.

The story of St. Thomas is an eerie one. Originally populated by the Anasazi people, Mormons moved in believing they were in Utah. Then they discovered that they had actually settled in Nevada. Nevada officials demanded five years back taxes which the Mormons refused to pay. So after a vote they decided to abandon the town. The Mormons burned down their homes and abandoned their crops and moved to Salt Lake City. Following that, St. Thomas spent decades at the bottom of Lake Mead after the lake filled up. As a result of drought, the town is visible again, and can be toured on foot. Drive 61 miles to the northern reaches of Valley of Fire State Park and stroll around.

Just 120 miles northwest of Las Vegas, it’s easy to see why Rhyolite is popular. The historic town, maintained by the Bureau of Land Management is one of the most photographed ghost towns in the West. The ghost town itself is large and well preserved, and still features crumbling old structures including a bank building, railroad depot, store, and school. Rhyolite also has the distinction of being the site of the Goldwell Open Air Museum, a mecca for fans of offbeat art installations. Check out the ghostly sculptures of the Last Supper and the Greek myth of Icarus.

Reserve your stay at pet-friendly, adults only (over 18 please), affordable Las Vegas RV Resort. We offer Good Sam and military discounts too. Or just call us at (702) 451-8005